“You become the story you tell yourself”
– Chad Kellogg, too bad you can’t see the inspiration that is going beyond your lifetime. Chad is credited with thinking up the first “Infinity Loop” on Mt. Rainier and then passing before he got to see it through, since then many others (including myself) have tested their mettle on Rainier in this style, even spreading the concept to other volcanoes.

Thank you, Chad. I am one you inspired.

I will never get tired of sharing this quote. It resonates so strongly with me. From the age of 16, influenced by writings such as “A Million Miles, In a Thousand Years” by Donald Miller and “Hero with a Thousand Faces” by Joseph Campbell, I became drawn to the concept of deliberately mapping the elements of great stories into our actual lives, the ones we live out and navigate every day. I chuckle about it now, but my first instagram handle was @navigateyourstory, no one my age understood. I became fastened to the idea of courageously taking on projects that scared me.  The Rainier Infinity Loop was one such recent this-scares-me undertaking.  After that experience, I knew I wanted to experience other mountains in the same fashion.

Unlike Rainer, Adams, or Hood, there is no circumnavigation trail around Mt. Shasta (as of 2020). Until such a day as one is completed, the simple rule is as follows:

In the event of a circumnavigation trail being completed, it will become the default travel (likely the fastest too) for this infinity loop. Hopefully, attention and interest drawn towards circumnavigation type efforts will lead to this development for the area. But, for now it is an epic of routefinding on some pretty brutal volcanic terrain.

Which leads to an important note: The GPX file included does not necessarily represent the best, safest, or fastest route for circumnavigation. There are old lava flows, volcanic boulder fields, insane waist-high manzanita ‘forests’, and deep creek canyons to navigate. Extensive mapping and scouting is recommended to find efficient and safe passage through these obstacles (or stupifying tenacity to grind through terrible lines).

Starting out: which direction, which part first?

I decided to start with a half-circ, instead of an over-the-mountain. This is unusual for infinity loop efforts, in fact, it may be the first time anyone has gone with a half-circ first. I chose this because I was more concerned about the route finding and volcanic terrain on the circumnavigation than I was about the routes I would be facing. I have guided and climbed both of the routes many times but the circumnavigation would be almost completely new other than some basic mapping/exploring during other trips. Because of this and the very melted out state of the Avalanche Gulch route, I elected to start from the Northgate Trailhead, which was an excellent call for the conditions.  The decision I would come to regret was that of taking on the Eastern half-circ first. I loaded up an Ultimate Direction FKT Vest with 1.6 liters of water mixed with Tailwind Nutrition, a Katadyn Be Free Filter Bottle, and some snacks. With old, beat to heck La Sportiva Helios 2s on foot and Ultimate Direction FK Ultra Poles in hand, I was ready to go.

I started my watch shortly after sun up, breaking into an easy trot. I wanted to be conservative as much of the terrain was unknown but something was off, within 5 minutes I was feeling nauseous and uncomfortable.  My heart rate was too high. Almost instantaneously negative thoughts wanted to flood in. Oh no, you’re sick, this is a huge effort, better call it. You may not be able to eat or drink properly all day. What if it gets really bad when you are in the middle of nowhere. This is a huge effort, you feel really bad.

And minute after minute, it wasn’t getting better.

You’re really going to go on for two trips over this mountain and 60+ miles like this?

But it wasn’t getting worse.

By 3 miles in, the body wanted to violently void.

Again before mile 6… I really hadn’t planned to use up my “if I don’t feel well at some point” resources in the first 75 minutes.

Do I actually feel a little better? I do. I think. I can always call it when I get to my car at Bunny Flat. I can do 21 miles sick for sure!

I found a little better stride on the road sections, but hopping downed trees and slogging through pumice soil was slow going between roads. Even through it all, I couldn’t help but gawk at the beautiful experience of seeing the different angles and glaciers of the mountain as I slowly changed my perspective one uncomfortable step at a time. So many of these views of this enormous mountain were still new to me even with my some 20 odd trips to the summit at this point.

The visual experience of literally walking my way through every view of a mountain, is perhaps one of my favorite parts of these types of efforts. Then combining it with one or two trips to the top, just makes it better.

I was eating now without feeling queasy.

Which came just in time to cross the Clear Creek route just above the trailhead, which meant I was about to take on the real obstacle of this half-circ, Muddy Creek.  To drop into the wash of Muddy Creek involves losing about 1000’ in less than a half mile before having to regain it on the other side. All on loose pine needles, pumice, and rock scree. The down was actually fun, the up…lesser so. It was work…and a bit sketchy.

As I looked back, it seemed obvious that dropping lower on the mountain or maybe getting a bit higher would have yielded an easier crossing. Yay, 20/20 hindsight.

I found the trail that weaves its way above Red Butte back down to Panther Meadows and started to find a quicker stride. I was excited to reach my first cache at my car left parked at Bunny Flat. I tagged the car 6 hours, 35 minutes into the effort.

I sat. I ate some fresh cherries. I swapped from my UD FKT Vest to my pre-packed UD Adventure Vest 5.0, changed shoes (to a beat to hell pair of Hoka Evo Mafates), and grabbed my same UD Poles. I am actually really impressed how well a body can run off just Tailwind Nutrition all day and feel good…as I hadn’t eaten any of my snacks for that section.

It was a slower transition than I had hoped for, but I also hadn’t planned on feeling sick for the full first 20.73 miles. I had to visit the bathroom yet one more time.

Time for the first lap over the mountain.

As mentioned above, Avalanche Gulch was not in good condition. Far too melted out to be fast or energy efficient. More scree switchbacks than one should ever count and severely sun-cupped snow. But, I wanted this. So on I went.

It was later in the day than I had planned for so it was slow going with some slipping and post-holing through the snow. But I was satisfied with a car to summit of 3:47.

I spent some time to take photos and enjoy the moodiness of the summit. Then started down!

I don’t know if you have ever glissaded, but it is basically glorified butt-sledding and it never fails to put a smile on my face. You sit down, get cold, and stand up 2000’ down the mountain. Ok, there is more to it than that, but this isn’t mountaineering school.

I cruised down the remaining scree, sand, and trail in a total of 1:55 from the summit down to Northgate Trailhead.

Half-done, at least mileage-wise. Little did I know what was about to come.

But before the dark and difficult, let’s enjoy some pretty pictures 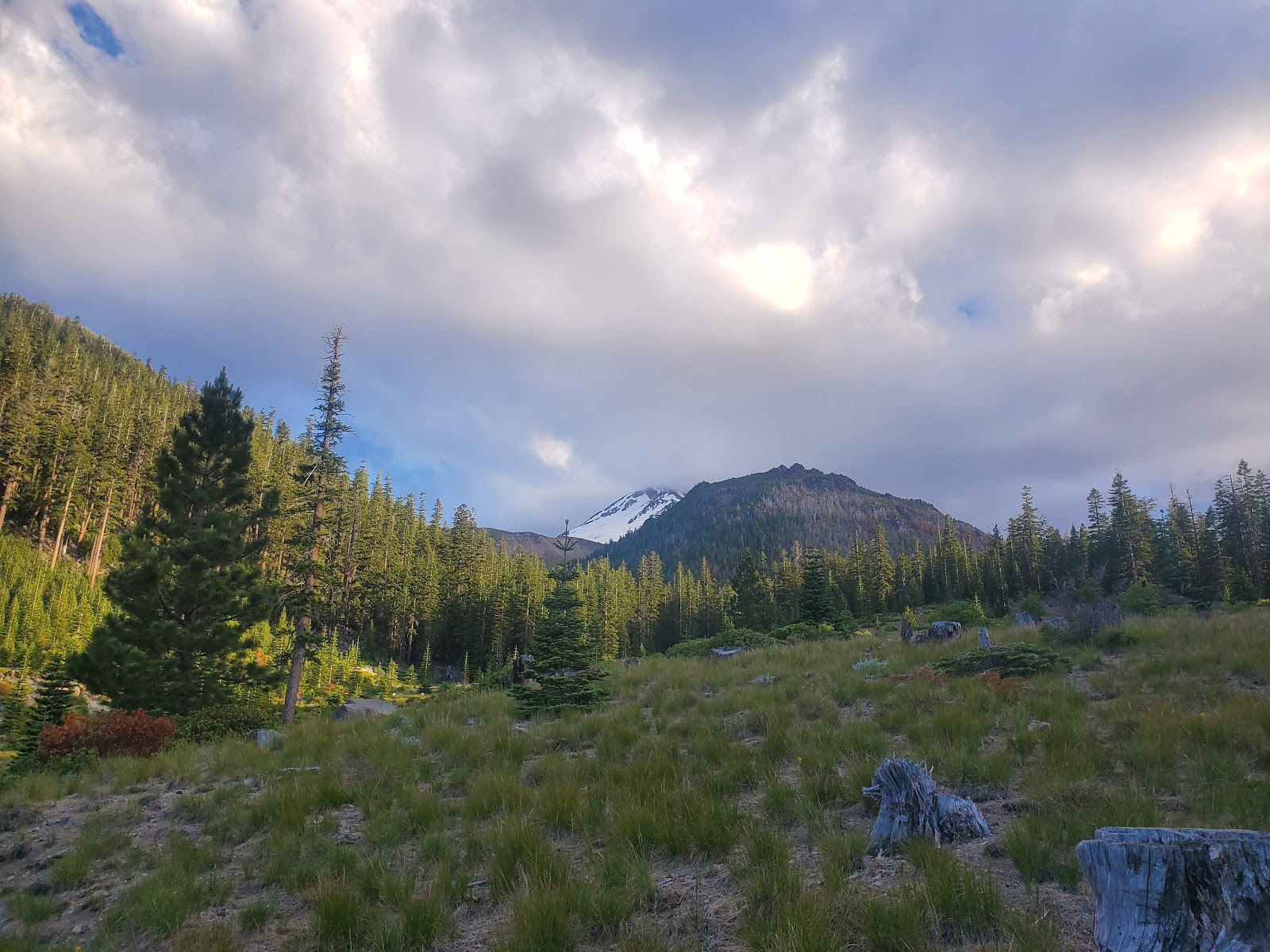 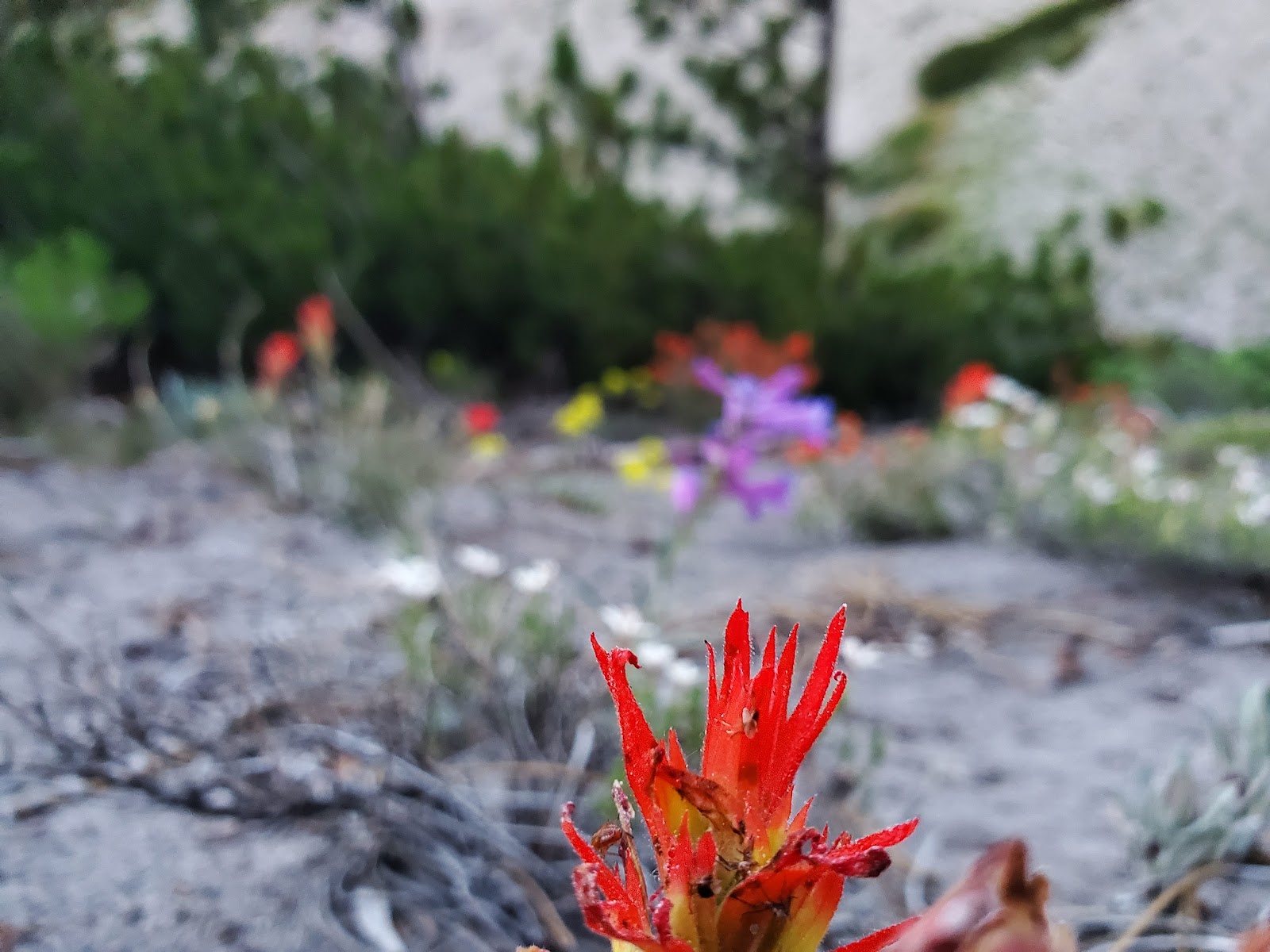 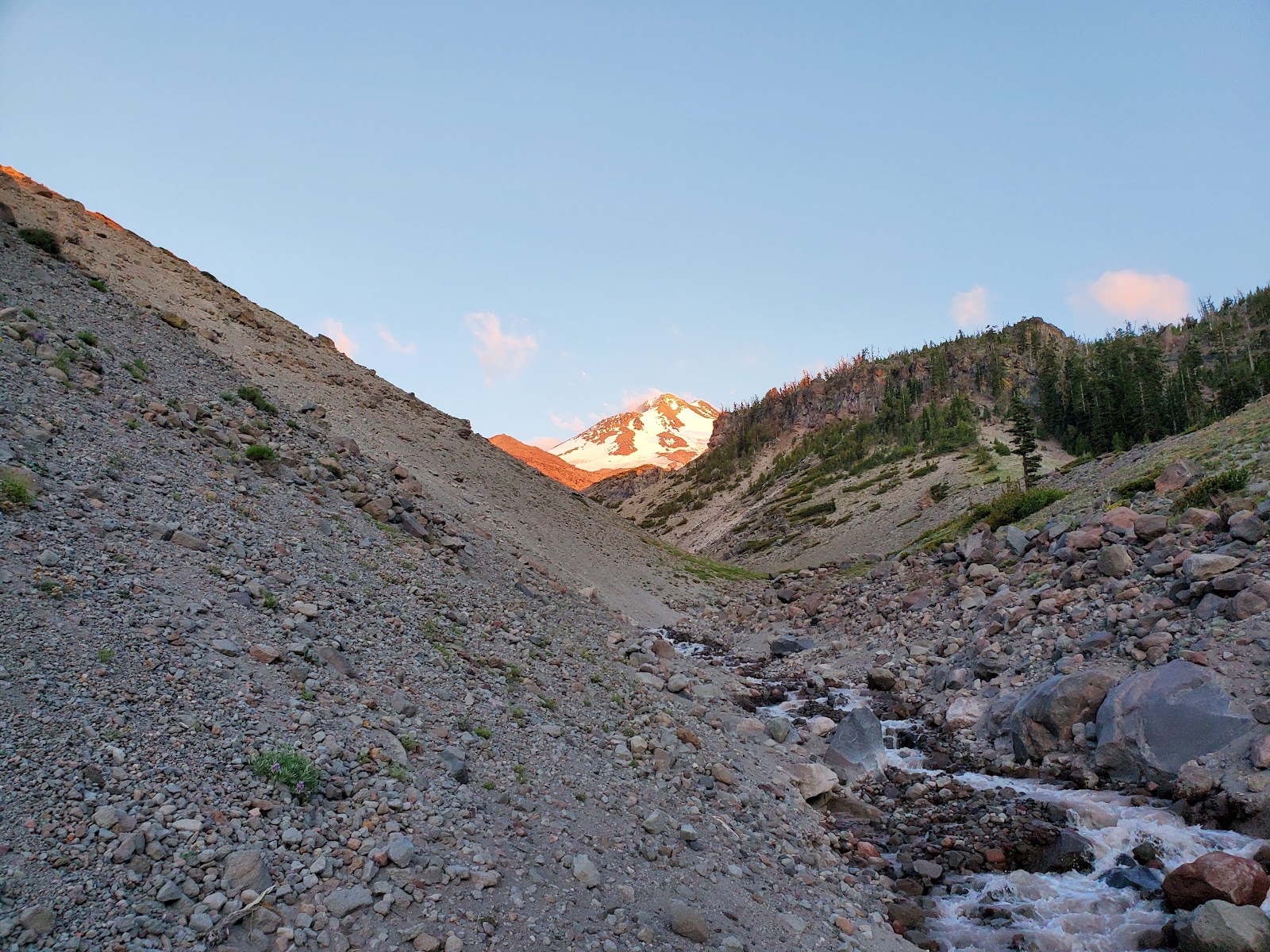 Minutes stretched on into unfathomed eternities as I encountered my first of the volcanic boulder fields on the West half-circ of the mountain below Shastina. The lava flows that created this boulder balancing mayhem are just so much more prominent on this side of the mountain. Constant ups and downs while scrambling boulder fields varying from chair-and-table sized down to annoying footballs-and-baseballs that would roll hitting toes and ankles.

Oh, that one moves.

Is that the dawn?

I expected the west side to be the difficult side. I didn’t expect it to be that difficult, nor that prolonged, nor that I would end up misjudging my timing enough to take it on in darkness…maybe the darkness was a blessing, to not see anything except the problem in front of me, instead of the endless expanse of problems that would stretch out as far as the eye could see in daylight.

I genuinely think that going lower on the West side will be the faster way the next athlete solves this section. It is such slow terrain that you can afford to add distance if it means you get below more of the flows.

I was still thrashing through manzanita as first light started to take hold in the sky.

FINALLY, ROAD! …Well, more the idea of something that was once a road.

I had finally connected with some of the old logging roads I had mapped for, I did not expect how overgrown they would be on this side of the mountain. The battle continues…

Some 10 hours and 53 minutes after leaving Northgate for the second time, I arrived at my tent that I had left as an aid station next to the Sand Flat Trailhead.  It was time for a brief nap.

I had not expected to be out here this long.

I ate, napped, swapped shoes to my La Sportiva Blizzards, and tagged the trailhead.

I don’t know if you have ever basked in the feeling of looking at 7,200’ of vertical gain before you with 47+ miles on your legs, over 27 hours of moving, with a one hour nap… but boy, I will say, “Them’s some feelings.”  It was a slow grind to ascend the slow, sloppy Avalanche Gulch route the second time.

But Shasta was smiling in the sun this round. Bluebird day for summit two.

I took the time to look around at the immensity of the circle I had created and the brutality of the West side terrain.

Then the next small motivational game popped up in my head, can I run down faster this time than last time?

How did I celebrate? Two days later I climbed the Hotlum/Bolam again, slowly while enjoying the views, with Ashly and we enjoyed an Athletic Brewing “Wild Ride” on the summit!

So while I am here, I have to ask…

~by Jason Hardrath
I am an elementary school teacher and speaker who tries to live what I teach,
I am on a quest to be the first person to establish 100 “Fastest Known Times”
on  amazing trails and mountains around the PNW this was number 69
Follow my journey to 100 FKTs
www.jasonhardrath.com
www.instagram.com/jasonhardrath
https://fastestknowntime.com/athlete/jason-hardrath